How Do You Know When It’s Time To Fire Someone? Firing an employee is one of the worst experiences you can have at work for both people involved.

It’s a topic that many managers like to avoid.

When is the right time to fire someone? Everyone deserves a second or third chance, but how many chances are enough?

Is it better to fire quickly and just rip off the band-aid? Or should you spend your time helping an employee change their behaviour?

These are all tough questions to answer.

In this post, I want to look at the signs that mean it might be time to fire someone, and then offer some tips on how to make it as painless as possible.

Free Bonus: Here are 11 signs that you might be fired soon.

It’s All About Hiring

There is an old management adage that says, “hire slowly, fire fast.”

You need to take your time on the hiring process, and make sure that you’re bringing people on board that align with your culture and values.

Hiring for culture fit is one of the most important things to get right because it will increase the likelihood of someone working hard for you.

Many hiring managers make the mistake of hiring someone with the right skills, but don’t fit in with the culture. The problem with this, is in managing and integrating this person into the team.

All of that time is wasted.

This becomes an even bigger issue if you’re hiring a manager, as they’ll likely hire people that are similar to them, creating an even bigger divide in the culture.

There are so many biases in recruiting that are hard to avoid, but you need to do everything in your power to make sure your hiring is as neutral as possible.

The best way to interview is through structured interviews where candidates are asked a consistent set of questions.

There are two types of structured interviews: behavioral and situational.

Make sure to take your hiring seriously and set up a process to ensure you’re hiring people that will be with you for the long term.

Keeping All-Stars On Your Team

Here is how Jack Welch, ex CEO of GE, and Reed Hastings, CEO of Netflix handle keeping all stars on their teams.

Jack Welch, one of the most famous managers of all time, was famous for his “rank and yank” system, where managers would group their team members into three buckets: the top 20 percent, the middle 70 percent, and the bottom 10 percent.

The middle 70 should be given coaching, training, and thoughtful goal-setting, with an eye toward giving them an opportunity to move into the top. Keeping them motivated is the most difficult part of the manager’s task. You do not want to lose the vast majority of your middle 70 — you want to improve them. As for the bottom 10 percent, there is no sugarcoating this, they have to go.

While I’m personally not a fan of this type of environment, and wouldn’t want to work in this environment, I understand the thinking behind it.

It gets everyone obsessed with performance and doing everything in their power to not be in that bottom 10%.

But more importantly, it removes the awkwardness and ambiguity from the firing process, for both the manager and the employee.

If your numbers aren’t good, you’re fired. Simple as that.

To work at a company as epic as Netflix, you have to be an all-star.

In their famous Netflix Culture doc, they talk about how they’re willing to cut employees so that there are stars in every position.

They’re very clear in letting employees know that they don’t stand for “adequate performance”, they want the best.

The test that they use is that managers ask themselves one simple question: Which of my people, if they told me they were leaving for a similar job at a peer company, would I fight hard to keep at Netflix? 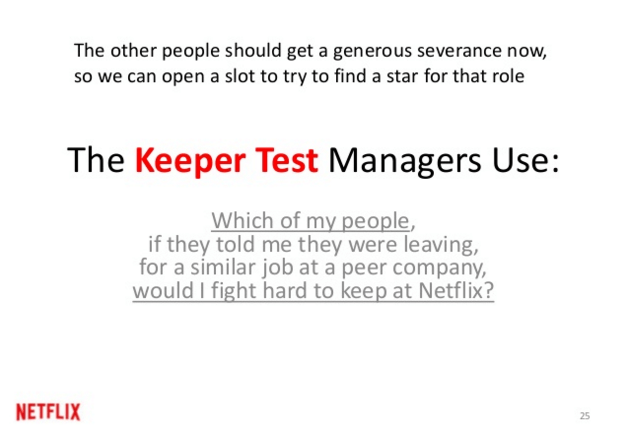 This is smart because it makes you really think about who is worth keeping on the team and who you wouldn’t mind getting rid of.

You need to respect the people you’re working with, and if you really respect and value them, then you should be willing to fight for them.

I think that you should only fire somebody as an act of last resort. If someone has broken a serious rule and damaged the brand, part company. Otherwise, stop and think.
If someone is messing things up royally, offer them a role that might be more suitable, or a job in another area of the business. You’d be amazed how quickly people change for the better, given the right circumstances, and how willing they are to learn from costly mistakes given a second chance.Richard Branson

All employees deserve a second chance, and you should work hard to coach and mentor your employees when you sense that something isn’t working.

Using one-on-ones, performance plans, anonymous employee surveys, or any other tool in your toolbox, you’ll (hopefully) be able to discover where the true problem is.

Once you discover where that problem is, it’s your job as a good leader to remove obstacles and make sure they’re happy and productive.

But how do you know when it’s time to let them go?

It’s all about their attitude. If they’re under-performing, are they actually trying to improve?

Here are the signs you should be looking out for:

If you don’t like the answers to any of these questions, then an under-performing employee needs to go. It’s too much of a burden on you and the rest of the team.

How To Fire An Employee

Firing an employee is no easy task, but here are a few tips for you to use to make it a little easier.

Free Bonus: Here are 11 signs that you might be fired soon.

Let us know in the comments below!