10 Books Every Leader Should Read 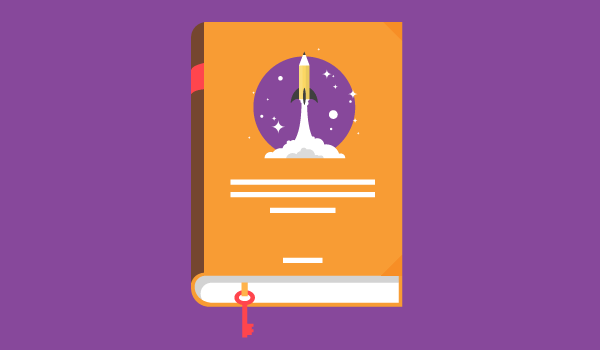 The best leaders are those that read a lot and on a diverse set of subjects.

Reading is one of the most powerful things you can do to improve yourself, from developing emotional intelligence to having a larger vocabulary.

Research has shown1 that reading makes you smarter through “a larger vocabulary and more world knowledge in addition to the abstract reasoning skills.”

The benefits of reading are absolutely incredible. Here are a few of the ways research has shown that it helps you.

As busy as leaders are, you should try to find the time to read. Block off time in your schedule for reading, the benefits are amazing, and reading is fun!

Here is a list of 10 books that every business leader should read. 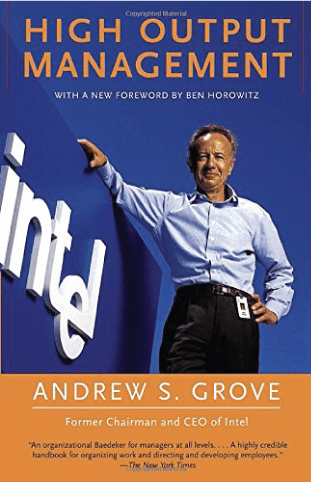 Andy Grove, regarded as one of the best leaders ever, reflects on his time as CEO of Intel in the 1970’s.

One of the most important things that Grove understood is that as a leader, your job is to enable others to do great work. The collective results of your team is how you’ll be judged, not on your own output.

Grove shares five key things that you should be focusing your time on: This is one of those books that you’ll have a hard time putting down. It’s the amazing story of Lou Gerstner’s turnaround of IBM. It’s such an incredible story, and the reading is so engaging.

In 1990, IBM had its most profitable year ever. By 1993, IBM was on its way to losing $16 billion and everyone thought the company would go bust.

Then Lou Gerstner was brought in to run the company.

Gerstner’s story touches on points that many people can relate to – the challenges that come with working in a large company. The communication challenges, the speed at which you move (especially during a turnaround), and lots of people not working very hard, which is common in large companies.

The book is a personal account of how he was able to rebuild leadership, change the culture, and give everyone there a sense of purpose.

3. The Amazon Way: 14 Leadership Principles Behind the World’s Most Disruptive Company By John Rossman In the world of eCommerce, Amazon.com was one of the first in the game back in 1994. Amazon is arguably one of the most disruptive companies of all time.

John Russman, who was a senior executive at Amazon and was responsible for building out their Merchants platform, shares 14 leadership principles from Amazon, useful tips, and stories from his time there.

Some of the principles discussed in the book are:

The most important one though, is ownership. Leaders are expected to take action, take ownership, and make sure projects are well-executed and complete. Marcus Aurelius was the Emperor of Rome from 161 to 180 A.D., and is considered one of history’s greatest thinkers.

What makes this book so interesting is that these writings were originally never meant to be published. These were just his personal notes he would keep as he tried to understand life.

These are his thoughts on Stoicism, life, leadership, and the world around him. The book is filled with leadership lessons and practical advice for everyday life.

It’s an incredible insight into the mind of someone who ruled history’s greatest empire.

5. Good to Great: Why Some Companies Make the Leap…and Others Don’t By Jim Collins 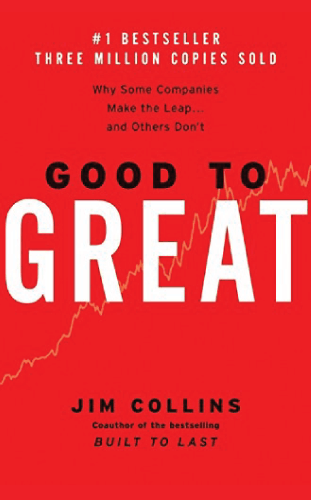 One of the most popular leadership books, author Jim Collins asked himself the question, “Can a good company become a great company and if so, how?”

Jim Collins and his team looked at successful companies and tried to find common traits that led to their success.

The secret? A company culture with a relentless focus. Everyone needs to be working together towards the same mission.

He also talks about level 5 leadership being one of the keys to success. Leaders need to have a perfect balance of being humble, but hungry enough to work hard for success.

These leaders had common characteristics: humility, will, ferocious resolve, and the tendency to give credit to others and taking the blame for themselves. Stephen Covey is regarded as one of the most influential management gurus.

The principles may be used for life in general and are not limited to workplaces or management. His concepts help people grow and become more effective in their daily lives.

His seven habits are: If there was one book on this list that I would suggest to read, it’s for sure this one.

Frédéric Laloux describes in detail how “Teal organizations” work and how they can be created. He studied many organizations and discovered what makes them work.

He says that we need more Teal organizations so we can evolve as a society and a civilization.

It explains in detail the framework needed for better organizations that can adapt to work in complex situations. Creativity, Inc looks at how Pixar became one of the world’s most loved filmmakers.

Written by Pixar co-founder Ed Catmull, he details the company’s rise as well as his own, from his childhood dream of becoming a Disney animator to becoming the president of Pixar Animation Studios.

What’s amazing about this story is Pixar’s drive for perfection. The entire culture knew that “good enough” was not good enough.

An amazing quote from the book:

Originality is fragile. There is no Occam’s razor, nor do great works somehow pre-exist, waiting to be discovered. Instead, we must cultivate relationships with people smarter than ourselves, insist they provide constant, candid feedback, and uncouple fear and failure, for failure is an investment in the future.

9. To Sell is Human By Dan Pink 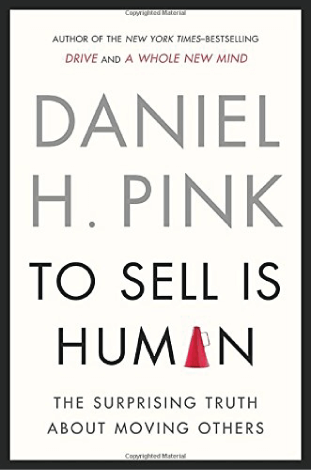 Dan Pink is of course best known for his book Drive about intrinsic motivation, and his TED talk The puzzle of motivation.

The concept of the book is that everyone is a seller. The image many of us have of a used-car salesman is no longer valid, as everyone is in one way or another selling/persuading/pitching something.

In a study that Pink commissioned, he found that people spend 40% of their time at work selling something.

It’s a great book because he shows that the world of selling is changing. In the old days, sales was all about deception, and had a really bad reputation as a result.

That deception was only possible because buyers lacked information. Now, with social media, review sites, ratings, etc. sellers have to be more honest.

He gives great examples and traits of successful sellers and helps us understand how to do it better. This is a must-read for anyone involved at any stage of the recruiting process.

The book goes into detail on how Google got to be so good at recruiting. Even though they receive around 50,000 resumes a month, they spend insane amounts of money on recruiting – optimizing and refining their process to make sure the best talent gets through the door.

The main takeaway from this book is that the traditional way of recruiting – posting a job, collecting resumes and interviewing, won’t attract the best talent.

The reason is because what your resume says and what you say during an interview don’t predict how well you’ll perform on the job.

The biggest predictor, is how you do in a sample work test, because you need to see a candidate in action.

While some companies do this, they often only require the test after the initial filtering and interview round is complete, meaning that there is potentially a huge pool of people that aren’t being considered because they never made it past the first round.

One of the biggest lessons Laszlo shares in the book is how much Google focuses on passive candidates.

He makes the smart point that the best and the brightest are often not looking for jobs, they have good ones, but they need to be groomed over time with lots of outbound marketing.

I made a mistake when originally publishing this post, and forgot to mention any women authors on this list. But there are so many good books by women authors, here are 3 great ones for leaders. Arianna Huffington’s story is an incredible one.

After overworking herself to burnout, she passed out and was taken to the hospital. Since then, she’s been one of the biggest champions for work-life balance.

Thrive is the third metric to redefining success (the first two are money and power).

2. Lean In By Sheryl Sandberg 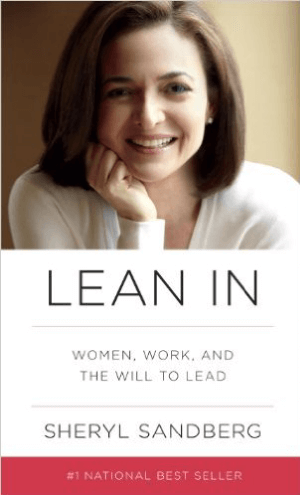 In the book, she gives examples, tips, and advice for helping women stand out in the workplace.

There is a lot of research that shows that teams that have more women are more successful, because of their higher emotional intelligence. It’s strange that women haven’t advanced as much in the workplace as men.

The book has become a phenomenon and women everywhere are starting to “lean in” more and take bigger risks at work. 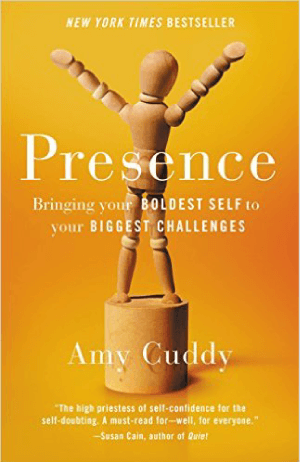 Amy Cuddy became famous with her TED talk about power poses, and how our body language affects not only how people perceive us, but how we perceive ourselves.

The unconscious cues that we give off have dramatic effects on our lives. By making very simple changes to the way we act (things like posture, hand gestures, etc.) we can not only present as more powerful, but we can become more powerful.

Backed up with lots of research, Cuddy (who’s a behavioral researcher at Harvard) shows how we can become better speakers, improve performance, and be better parents/spouses.

What Books Do You Enjoy Reading?

Have any good recommendations for us? Let us know in the comments!